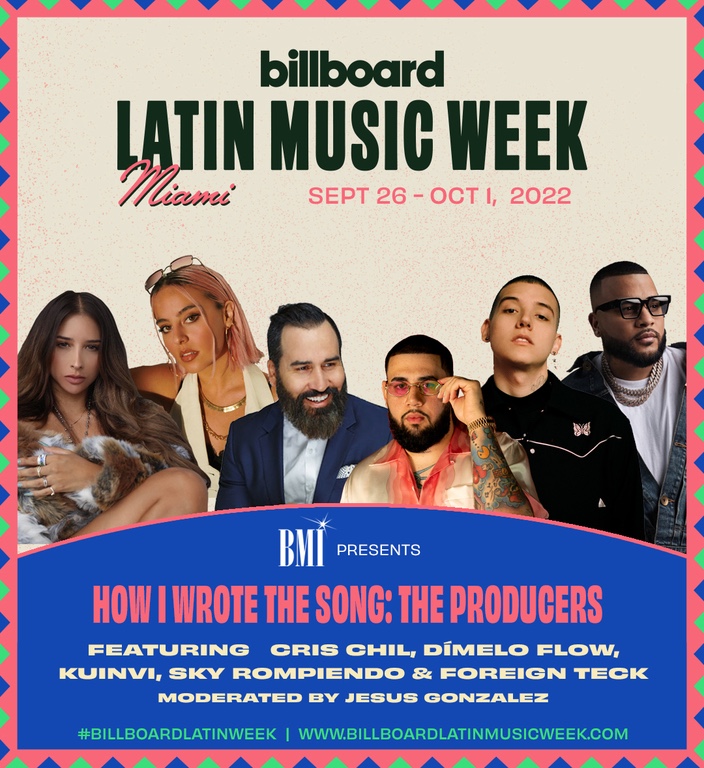 LOS ANGELES, CA – September 14, 2022 – BMI (Broadcast Music, Inc.) is proud to present “How I Wrote That Song: The Producers” at this year’s Billboard Latin Music Week at the Faena Forum in Miami on Monday, September 26, 2022. The panel will feature prominent hitmakers from around the globe including Cris Chil, Dímelo Flow, Kuinvi, Sky Rompiendo and Foreign Teck. BMI’s VP of Creative, Latin, Jesus Gonzalez will moderate the conversation as the panelists discuss the process of producing hit songs, collaborating with artists and opportunities for aspiring creatives.

“We are thrilled to continue our longstanding relationship with Billboard Latin Music Week and present our signature “How I Wrote That Song” panel,” said Gonzalez. “This year, we invite an incredibly gifted group of producers to join us and discuss their creative process and share the stories behind some of today’s biggest hits. Thank you, Billboard, for providing our family of creators a platform to share their journey.”

BMI’s panel “How I Wrote That Song: The Producers” will give audiences insight on what it takes to make a hit record as the panelists discuss the art of songwriting and producing. Here is more information on this year’s featured panelists:

Cris Chil is the prominent songwriter and producer behind fan-favorite songs like “Contra La Pared” by J Balvin and Sean Paul, “Lento” by Lauren Jauregui and Tainy, “Fuego” by DJ Snake, Anitta and Sean Paul, and “I Can’t Get Enough” by Selena Gomez, Benny Blanco and J Balvin. She hailed from Ecuador and moved to Miami to pursue her musical career in 2014. The young talent later signed with Pulse Music Group / Magnus Media and was named one of Billboard’s “Top 10 Latin Songwriters” in 2021, for her hand in the worldwide hit “Telepatía” by Kali Uchis.

Jorge Valdés Vásquez aka Dímelo Flow has positioned himself as not only a DJ and producer but an influential artist. His first studio album, Always Dream, was released in June and is gaining international success garnering more than 224 million streams on Spotify alone. Vásquez began his musical career as a DJ in Florida and later went on to be known for his rhythmic style fusing Latin urban music and hip-hop. Over the years, he has collaborated with some of the top artists in Latin music including Justin Quiles, Nicky Jam, Sech, Farruko, Wisin & Yandel, and Lenny Tavárez, among others.

Kuinvi is an Ecuadorian producer and songwriter based in Miami. She began her career shortly after graduating from Berklee College of Music and has worked with the likes of Becky G, Sebastian Yatra, Khea, Lele Pons, Guayna, Paty B, Danna Paola and Lola Índigo, among others.

Alejandro Ramírez Suárez aka Sky Rompiendo is a Colombian producer, songwriter, DJ and artist. He is one of the most influential producers in Latin urban music and has created a multitude of hits for the likes of J Balvin, Karol G, Rosalía, Ozuna, and Rauw Alejandro to name a few. At the beginning of his career, Suárez was a part of the duo Sky High but later went on to pursue a solo career. Sky has worked closely with mega-star J Balvin and is the man behind some of his most iconic hits including “6 AM,” “Ay Vamos,” “Energía,” “Bonita,” “Otra Vez” and the international anthem “Mi Gente,” among others. In 2020, Sky released his first album, Infinity, which showcases his unique style combining Latin rhythms with hip-hop beats. The revered producer’s works have gone on to receive billions of streams and much praise garnering him six Latin GRAMMYs and three nods for Producer of the Year at the Billboard Latin Music Awards.

Rounding out the group is GRAMMY-nominated producer Foreign Teck. His unique sound has landed him a vast range of collaborations on hits like “Losses” by Drake, “Drive the Boat” by Pop Smoke, “Can’t Stop” by DaBaby, “Too Young” by Post Malone and many others. Most recently, Teck made a name for himself as an artist and released his debut single “Conexión.” The mega-hit is now certified Platinum and has gained over 100 million streams.