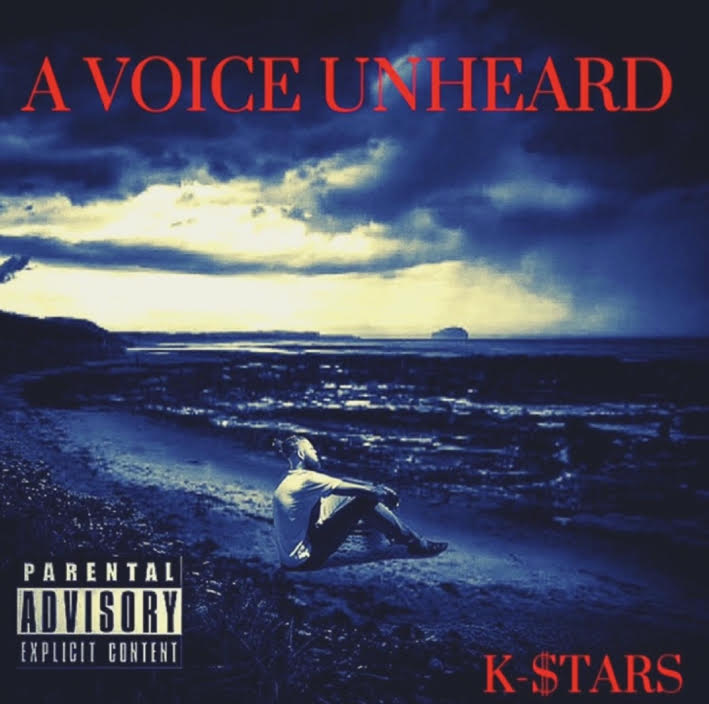 One of the biggest things that is lacking in music, is artists who are willing to take chances. Artists who are daring to be great. In a time where you hear many artists using the same formula, it’s becoming more of a rarity to hear an artist who takes chances to make music like we’ve never heard. That’s what you get from K-$TARS on his new project “A Voice Unheard”. An 11 song project that gives you 41 minutes of pure artistry, with something for everyone to enjoy. Below is break down for this body of work.

A Voice Unheard (Intro): “We go track for track, I bet you will lose” The hunger for more shines in this strong intro. The production sets the tone with a hard edge to it, that compliments his style perfectly. His rhyming is filled with conviction as he presses forward with an exhilarating flow, and sharp rhyming to command the listeners attention for this project.

Who I Am Featuring Nalo: To keep the project going the music slows down, but the energy remains with a catchy hook, that is complemented by the super lyrical verses to bridge the gap between casuals and purists. Nalo brings more value to the record with an impressive verse, full of flavor in the flow and great rhyming on this must hear record.

Out of Pocket: One of the greatest assets of the project is its ability to make lyrical Hip Hop digestible for the masses, with this record being a shining example of that fact. The record is packed with appeal for a record that shines like a single. The rhyming is slick and player as he shows off his bravado that’s infectious and enjoyable.

The Have-Nots: “Sometimes I feel lost like I’m a tourist, but I’ll figure it out cause I’m maturing” If there was a record that encompasses his style it’s this one. His rhyming is beyond supreme with him lyrically being on another plateau on this commanding production. He brings an authenticity to the record that makes you feel the music, as well as learn about the man behind the music, as we hear him in his finest hour.

Lyrics in the Sky Featuring Jee Skee: A great switch up at the right time. Coming from the high energy of the last record, he slows it down with a smooth soul sound, that he delivers a stellar melodic chorus over that takes this record to another level. His flow is ride in pocket, as it glides over the beat with ease into the listener’s ear just right.

Chitty Bang Featuring Jee Skee: The project pushes along sonically well. The piano keys in the production bounce off each other well, and his rhyming does just the same, as you hear him being a master of his style to deliver his lines at will. Jee Skee brings the record home as he gives the record more to make it a song that doesn’t miss.

Sleeping Alone: The perfect record to show his high level of artistry. He brings a dark love story full of transparency and conviction needed, as he conveys emotion to a genius level. The production is layered in hard drums, that are accompanied by synth sounds, and an electric guitar to play the perfect score for the vision he brings to life.

I’m Sorry: “I’m alone in this world, and I desire a mate” His ability and willingness to take chances is one of his greatest strengths. That honesty and realism that people look for in music, is what he delivers as he gives his all in this record, that is more than enough to keep this love story going.

Darkness Bright Featuring King Breeze, Supreme, and Nalo: Having features on a record, is finding the right people to add more to your vision, and that’s what shines true on this record. The song with the most features that help close out the project, as each emcee brings a commanding presence, to deliver their poetic rhymes to the fullest on the longest track on the album, that’s amazing for every minute they give us.

Out of Pocket Featuring Mud Meezy and Iceman JB: To close out the project he enlists Mud Meezy and Iceman JB to bring a remix to one of his swaggiest records. The record still holds the magic of the original but adds that extra level of spice to it, that gives it more life and the perfect closer on this great body of work.

K-$TARS “A Voice Unheard” is a compete project that gives you everything. He goes beyond just putting a collection of songs together, but brings a vision to life that gives the listener a record for every occasion. He brings upper echelon emceeing to show off his lyricism to the fullest, and bring supreme artistry to show his full range on a smash of a project for us all to listen to and enjoy without limits.