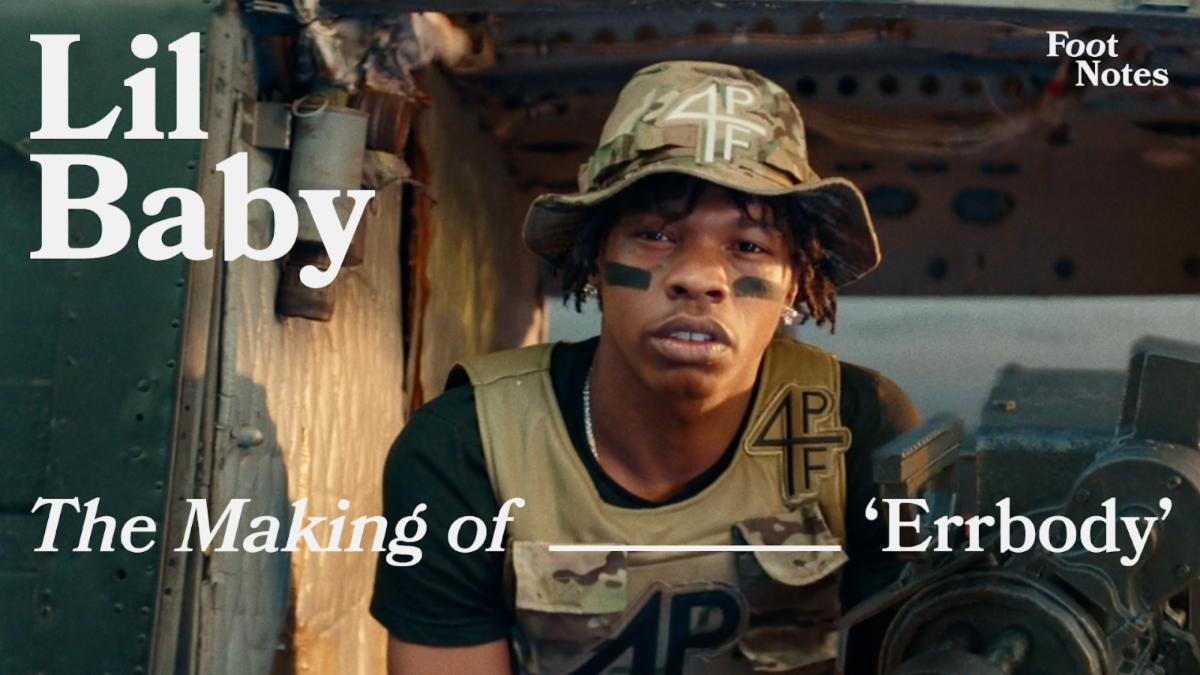 Grammy-nominated rapper Lil Baby has exclusively partnered with Vevo for a behind-the-scenes look at his action-packed music video “Errbody.” In the Vevo Footnotes episode, he reveals his favorite scenes to film, talks the thrill of doing his own stunts and bringing a helicopter into his hood. Directors Edgar Estevez, Daps, and Christian Breslauer also explain their inspirations behind the video concept and the challenges of filming the helicopter scenes and the car chases with spectators in downtown Atlanta. A complete outline of “Lil Baby ‘Errbody’ | Vevo Footnotes” is listed below.

Footnotes Outline:[00:08] Lil Baby released the ‘Errbody’ video on Dec 3, 2020, his 26th birthday. [00:12] The video was directed by Edgar Estevez, Daps, and Christian Breslauer. [00:16] Filming took place in Atlanta over the course of three long days. [00:23] “Edgar wrote the treatment for this concept when P called him and said he needed a crazy visual. Coming with heavy action concepts he knew collaborating with Christian, who’s done tons of action movie inspired music videos, was a no-brainer and would bring the cinematic vision. Daps was the glue holding us all together having worked with Lil Baby so much.” -Edgar Estevez, Daps, & Christian Breslauer [00:36] Daps previously worked with Lil Baby, directing the video for “Baby” featuring DaBaby. [00:47] Lil Baby is driving a vintage Chevelle SS. The other car is a Dodge Charger Hellcat.

[00:54] They filmed in downtown Atlanta, and a huge challenge was working around all the pedestrian onlookers who would almost always get in the way.  [01:02] “The most challenging part of the shoot was the car chase sequence. Safety was a huge factor, and from the stunt drivers to the camera operators, we needed to be sure everyone was on the same page. Shooting a sequence like that is a well-orchestrated dance, and everyone needs to be in sync to create the magic.” – Edgar Estevez, Daps, & Christian Breslauer [01:11] Another challenge was putting a real helicopter in the middle of Baby’s hood.

[01:20] “With that being the hook of the song, we knew there was no other option. It was super important to Baby.” – Edgar Estevez, Daps, & Christian Breslauer [01:33] You’ll notice the helicopter is branded with Lil Baby’s 4PF logo. It’s also on his military uniform.  [01:43] The directors were inspired by a number of classic action movies. [01:52] “We knew we wanted some high tech machine gun coming out of the hood, where Baby could perform as he is hunting his prey.” – Edgar Estevez, Daps, & Christian Breslauer

[02:19] This was Baby’s favorite scene to shoot because he did all the stunts himself. [02:38] “I fought a guy, dragged another by his legs out the house, and threw a knife at another guy, it was a real thrill.” – Lil Baby [03:02] Lil Baby recorded the track at QC Studios. Section 8 produced it. [03:13] “I would describe the song as Baby in rare form. A lot of my tracks are melodies and on this one I went non-stop.” – Lil BabyEmbed<iframe width=”560″ height=”315″ src=”https://www.youtube.com/embed/gx4GCIF6t6U” frameborder=”0″ allow=”accelerometer; autoplay; encrypted-media; gyroscope; picture-in-picture” allowfullscreen></iframe>ABOUT VEVO: Vevo is the world’s largest all-premium music video provider, offering artists a global platform with enormous scale through its network of distribution partners. Vevo connects artists with their audience globally via official music videos and original content. Reaching 26 billion monthly views globally on average, Vevo has more than 500,000 music videos in its catalogue.
Vevo’s distribution partners include YouTube, Amazon Fire TV, Amazon Echo Show, Roku, PlutoTV, Apple TV, Latido, Redbox, T-Mobile, NetRange, Foxxum, Virgin Media, Sky (NowTV and SkyQ), XITE, Vewd, Xumo, Samsung, Samsung TV Plus, Telstra, VIZIO, and Comcast (Xfinity X1 and Xfinity Flex).Press contact:Greg Miller – Big Hasslegreg@bighassle.com