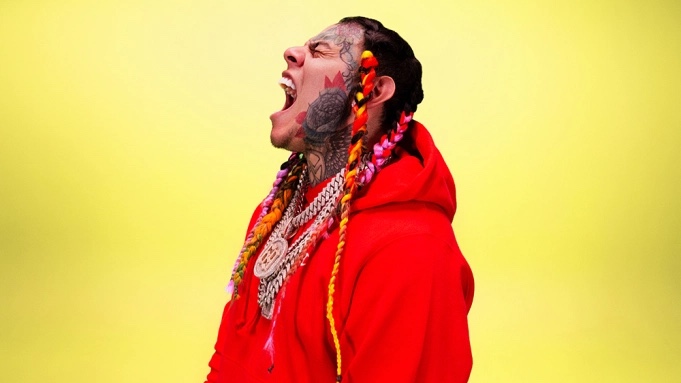 By Kody Sloos: As many of you know Bushwick, New York artist Tekashi 69 has now been free of home confinement for just over a month now. Since taking to the streets once again, 6ix9ine immediately returned to his old antics. Trolling other artists in the industry, showing off hundreds of thousands of dollars in public, shooting videos and walking the streets of New York with his posse of militant security. The one thing Tekashi hasn’t been is humble. You would think, after barely escaping a 47 year prison sentence, the New York native would take a moment to smell the roses, this has not been the case, not even close.

While living in a time of digital streaming, album downloads, bundling and other ways to boost album sales, first week sales have become somewhat of a competition within the music industry, especially in hip-hop. Since returning to social media, 6ix9ine has taken it upon himself to clown some of the hottest names in the rap game for their “low” first week numbers. While calling out names such as Lil Durk, Trippie Redd and more, 6ix9ine put a massive amount of unnecessary pressure on himself, while announcing his album was releasing September 4th. While the date quickly approached, the rap game along with many fans, stood back and watched with anticipation. Everyone was on stand by to see if Tekashi could put his money, or album sales, where his mouth was.

It has now been almost two weeks since 6ix9ine released his second studio album “Tattle Tales”. The first week sales projections were originally estimated to be 150,000 which would of been a massive win for 24 year old Tekashi, sadly things changed. In the past we’ve seen artists at every level, incorporate strategies to boost the sales of their album. Previously artists were able to bundle their album with merchandise to boost their sales. Examples such as when Travis Scott used keychains, hats, concert tickets to boost the sales of “Astroworld”, or when DJ Khaled did his best to edge out Tyler The Creator’s “IGOR” by bundling his album sales along side energy drinks to take the number one spot. This strategy has been implemented for some time now, becoming the new norm in the industry. This is exactly the same road that Tekashi would go down when “Tattle Tales” was announced.

With the original projection of 150,000 first week, we can only imagine Tekashi was showing off that brand new smile of his, sadly it would be short lived. For months the speculation that bundle deals would be taken off the table, circled the internet. Although there was no set date on when this new policy would come into effect, it was clear the new rule was placed into effect when 6ix9ine’s first week projections dropped by over 100,000. The first week projections for the “Tattle Tales” rapper would drop as low as 40,000 days before the numbers were collected and the internet EXPLODED.

Trolls took to the comment section of almost every single hiphop page on instagram to let 6ix9ine know, his career was over. Now this is where it gets messy. 55k first week sales is absolutely nothing to be ashamed about, in fact if we take away bundles, 55k is down right impressive. None the less, we know how the internet works, if 6ix9ine was trolling artists for selling 50k then the internet gave that same energy right back to him. Now with the behaviour of the New York artist, it’s hard to feel sorry for him, honestly you shouldn’t. 6ix9ine landed a #1 spot on the Top Album SALES chart. This is PURE sales, without streaming. 6ix9ine’s album landed #4 on Billboard 200 and his pure sales first week amounted 25k+, a number that is very high in present day.

All this information is very hard to decipher when deciding if his career is “over” or not, but while many would say the 24 year old is one his way out, you could argue he’s still here to say. My thoughts after all the madness are as followed; I think Tekashi’s career in North America (Mostly Canada & US) is going to be short lived, but many forget how successful the rapper was on tour overseas. The European listeners ADORE him, if anything were to “save” his career, it would be a European tour.