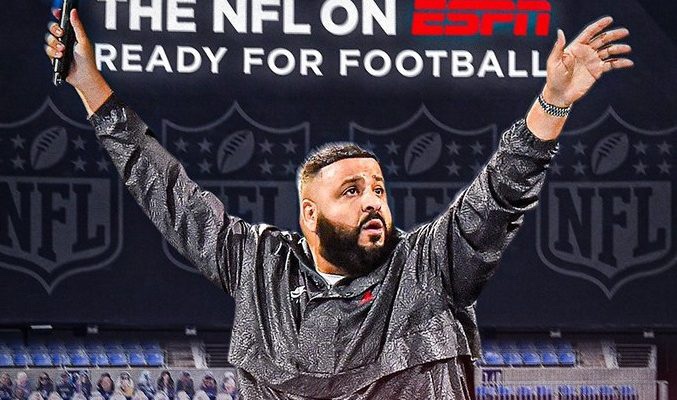 ESPN has announced a season-long music collaboration with DJ Khaled for Monday Night Football. As a part of the collab, Khaled will also announce the news on his social media and take over the ESPN social accounts

Throughout the season Khaled will select tracks that reflect the energy and stories of select MNF games. The music will be in promotional spots, live telecasts, and pre-game shows, beginning with a showdown of the last two league MVPs in the Chiefs-Ravens battle on September 28. DJ Khaled will also select a song specifically celebrating Hispanic Heritage Month for the Chargers-Saints game on Monday, Oct. 12.

“I’m excited to collaborate with the NFL and ESPN again as we celebrate the return of the 2020 season,” said DJ Khaled. “Last year was a movie, kicking off the Super Bowl in Miami and now I am providing the vibes for fans everywhere as a music curator for Monday Night Football. From working with ESPN in their creative campaign ‘READY FOR FOOTBALL’ to providing the soundtrack for the NFL season – this is going to be epic.”

“We’re incredibly excited to collaborate with DJ Khaled to curate music for Monday Night Football throughout the season,” said Emeka Ofodile, Vice President of Sports Marketing, ESPN. “Music is one of the greatest tools we have to connect with fans, and the NFL on ESPN brand is a place to work with some of the best DJs and producers in the industry. This curatorial role really resonated with audiences when we first introduced it with Diplo last year, and this year, we’re tapping into DJ Khaled’s talent and influence at the intersection of sports and music to provide this season’s soundtrack.”