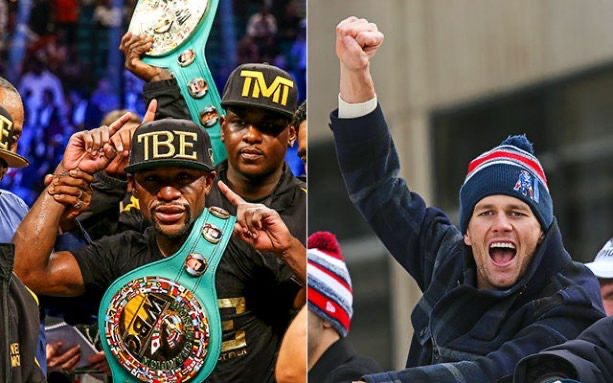 Comparing athletes is never ideal and can cause a lot of backlash. Especially saying that New England Patriots’ Tom Brady is comparative to Floyd Mayweather aka “Money May”.

Both athletes are recognized as modern day GOATS. Both exuding excellence in their respective crafts, but that’s only a small reason why we say Tom Brady is Floyd Mayweather in his latter career. To get to the point we must first remove the antics of Floyd and strictly examine the boxer.

Floyd Mayweather was first known as “Pretty Boy Floyd”. A young boxer with pure skill that made him a wizard of his sport. High energy nice output rate, matched with superior boxing skills that helped him rise to prominence. Floyd took a two year break and came back as “Money May”. He came back to his sport and dominated in a different fashion. He longer had knockout power and didn’t move around the ring nearly as much, but what he did have was incredible fundamentals.

Floyd was able to acknowledge his skills and timing were diminishing but was able to reign supreme off of perfected fundamentals, lateral movement, and genius level knowledge of his sport to have a dream career.

Now to Tom Brady. Tom was overlooked by every team except New England coming to the league but once he was able to start he never looked back. Including winning multiple Super Bowls and breaking passing records.The past couple of seasons there has been more debate on if he has lost a step. The short answer is “yes” but what he lacks in god given ability he makes up for with pure football instinct in knowledge.

Just like Floyd Mayweather in his latter days, Brady finds a win every time with impressive or just getting by he gets the job done and stack up numbers in the only columns that matter, wins and championships. Tom may be far past his days of slinging the ball downfield but his awareness and check down method, allows him to know match ups to get the Patriots by and a win every time.

Every year we question Tom Brady and the Patriots greatness and every year doubters a re proven wrong juts like Floyd Mayweather with every fight.